A few days ago, Pakistani social media was traumatized by a young influencer and doctor’s death. Maha Shah, a girl in her 20’s, an enthusiastic influencer as well as a medical professional was found dead in her room in Karachi, Pakistan. Her family was devastated because of this unexpected incident. They were unaware of the struggle Maha was going through against depression, anxiety, and blackmailing by a crooked person. She hid all the burden underneath a beautiful smile, one that’s now lost forever.

Her family was blamed in the name of “honor killing” and was investigated thoroughly. Police and the autopsy reports came to the conclusion that this was a suicide not killing in the name of honor. Maha Shah’s brother recently took posted on Facebook regarding these disgusting false accusations.

He said, “This post is for the people who have been misled regarding the death of my sister. Rather than believing anything you read on the internet you people can message me and ask me directly about what happened. yes, it will be devastating for me to repeat everything that happened but it wouldn’t be as devastating as it is to come across bullshit stories about my family. We were the happiest family. We loved each other and were each other’s best friends. My father loved maha more than anyone in this world. just message me and ask rather than believing rumors.“

Here’s what Maha Shah’s cousin, Fatima Shah has to say about the case:

UPDATE: The page has been removed.

These false accusations against her family took to the news channels when the Canadian green card holder and actress Ushna shah made a tweet regarding the incident. The involvement of Ushna shah made this case more of a conspiracy as she demanded further investigation. Ushna shah stated in her tweet that Maha was shot at the back of her head. This is a straight out lie. The wound of the gunshot was behind her ear as investigated by the police. 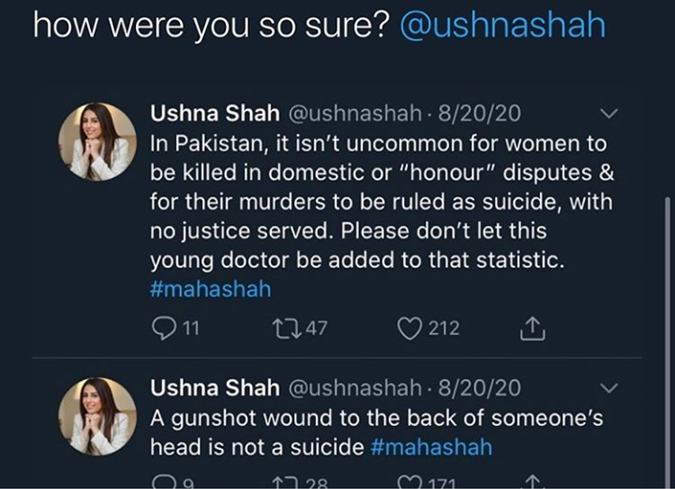 Now, why would Ushna Shah tamper with information?

Junaid khan was the person who induced this suicide. He killed Maha by leading her to a stage of depression from where there is no coming back. He belongs to a wealthy and well-connected family thus, used his powers to keep himself out of it. But truth cannot stay hidden for long.

Junaid abused and blackmailed her. He drugged and assaulted her. He was the reason why Maha was going through this immense phase of mental destruction and depression. For now, he is in police custody and being recognized as a liar and a toxic manipulative person. Kudos to the police force for their services. However, Junaid Khan is a criminal with wealth and power, we are still fearful of his escape from conviction.

Maha’s family did further investigation on their own and they got to know the real face of Ushna Shah. She is a close friend of Junaid Khan thus used her social platform and fame to save Junaid from rightful conviction. One who hides crime by accusing the innocent is undeniably evil. Ushna shah should also be punished or she must apologize for spreading false rumors.

Mental health is an issue in Pakistan that needs to be highlighted. We have nothing to give to the drug addicts, depressed, and mentally unstable out there. Wait, we’re already doing something about it, aren’t we? Fatway jari kardo sab per! Victimization is the way to go here.

This age of technology, as quickly as it is developing, leaves a huge impact on our lives. Fake relationships, mean and toxic friendships, fake personalities, and the race to control the world are leading us to a road where there is no future.

Sana Tariq is doing Masters from NUST, Islamabad. Working as a Content writer. She is eager for her voice to be heard for the sake of truth. She aspires to be Kind and Peaceful.